The #NOTlistening Podcast - Yes The # Is A Part Of The Name

While drinking my morning coffee I had this fun exchange with @barkerpodcasts on Twitter: 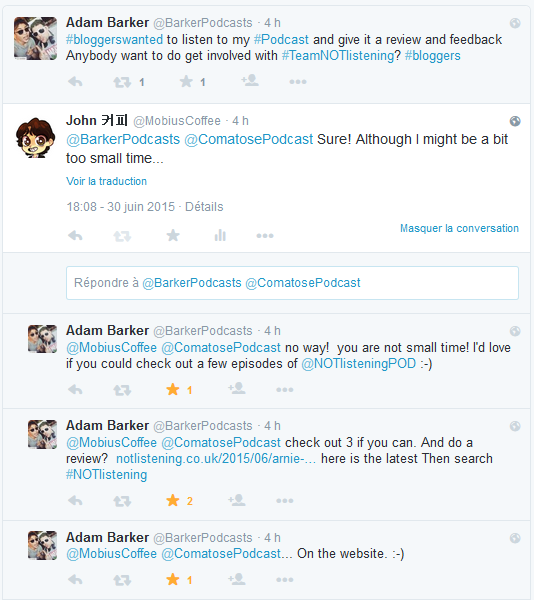 So I got to listening to their show and after the initial shock of seeing a website that looks like it was outsourced to someone willing to work for pennies, the actual show was a pleasent surprise.

The show starts with pleasent music and fades into a few people talking. My first thought was this is going to be a four dudes and a mic podcast, and with a sigh I continued listening, because I didn't want to back on my Twitter word.

When I glanced down to check how long the episode was, I was surprised in a good way that it clocked in at around 15 minutes. This was going to be an episode I could actually fully listen to!

There are some audio problems where the levels are a bit off between the hosts, but it's not that big of a deal. They manage to be genuinely funny and not just in a we're idiots kind of way, but an actually interesting way.

Not something I would normally listen to, but if you like freeform comedy podcasts, this is a good show. It's very aware of itself and doesn't try to be something it's not. A couple of funny people briefly discussing absurd topics.

You can check out the episode I listened to, Arnie lied to us! on their website, www.notlistening.co.uk, iTunes, or on the Spreaker player embedded below.